Us with Mrs. Magda Brown

Reflecting on an impression of a collection of artifacts related to such a massive tragedy in humanity’s history is not easy to put into words; simply put, last week our class made a visit to Illinois Holocaust Museum in Skokie, Illinois and received a lecture from Hungarian Jewish Auschwitz survivor, Magda Brown. This description only explains a location and an encounter, but the experience of standing within an authentic 1930’s boxcar that transported people to death camps is more eerie than words can express. Magda Brown’s story was even more impactful, as first-hand experiences of Auschwitz are not common.


I have studied the events of the Holocaust fairly extensively, and most recently in a course called Suffering and Forgiveness. Films and books cannot compare to the emotional effect of seeing Jewish stars, concentration camp clothing, or miniature models of the intricate Auschwitz. Everything with a clear design for mechanized murder. One document in the museum stood out, with a chart and detailed instructions of how to measure and cut a mass grave, so that many victims can be lined up, shot and fall directly in. Execution planned like any kind of engineering. Some perpetrators treated it like a job and others seemed to enjoy it. Enjoy the mass murder of a race and religion; enjoy the murdering of innocents. 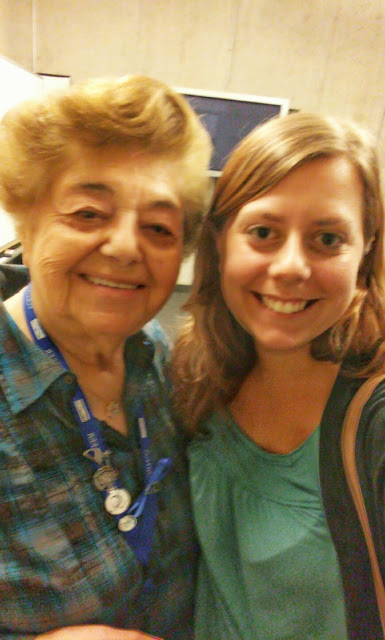 Magda Brown had a magnificent spirit to her. She was full of hope and joy and she seemed to tell her story as if it happened to someone else, with calm tones and neutral facial expressions. Explaining the pain of hunger and thirst, to only think of a sip of water for days on end. As a young teenager, small to begin with, and shedding sixty pounds in her stay in the camp. To simply state that she felt more like an animal at times, while maintaining composure. Meanwhile, I was tearing up from the first few words of her detailed encounter. She recalled that of her seventy Jewish family members, only six survived. The fact that anyone survived such a hell is still beyond comprehension to me. She was changed by her imprisonment, and in some ways it appeared to free her from fear of death and enlighten her to appreciate the small blessings that life offers us. She is even bold enough to speak often with grandchildren of SS soldiers. Magda discussed the concept of hate and she emphasized the need to highly reconsider the hatred of anyone, but especially a category of people. Hatred is a disease, like cancer, and she has chosen to transcend above hatred. Let us never forget; never again.